PUBG Mobile Vietnam announced a new solo tournament “Duong len dinh bo”. This is an unprecedented solo award and a chance to get straight into the PMNC 2021 qualifiers.

“Duong len dinh bo” is the first solo tournament within the framework of the PUBG Mobile National Championship 2021. In particular, PMNC 2021 is also a tournament in the professional league system and is also the only way to PMPL VN S4. This means that from now on, highly skilled PUBG Mobile players can also find their own way to the nation’s highest ranked esports playgrounds.

The tournament has a high amount of prize money and the winner gets straight into the PMNC 2021 qualifiers.

The tournament has a prize money of 40 million VND, taking place from June 12 to June 23. Notably, the top five in each group will form 1 team and have a direct entry into the PMNC 2021 qualifiers.

Which MSC match are you waiting for today? 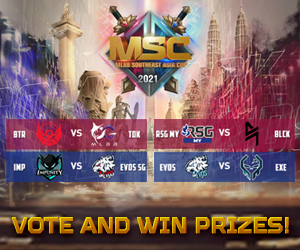 You will be redirected

“Duong len dinh bo” strengthens the message of the award: From Solo to Squad – Professional Opportunity To Each Individual.

Are the gamers of the PUBG Mobile ready to participate in this tournament?